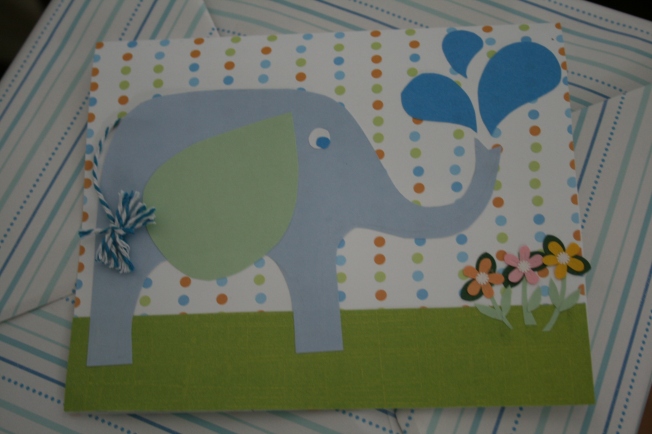 Saturday I attended a lovely jungle-themed baby shower for my friend Jackie. Being practical, I bought the diaper pail off the registry. Since this isn’t exactly the kind of thing people ooh and ahh over, I wanted to make something cute to go along with it. I intended to mod podge the elephant mod onto a little 8″ x 8″ canvas, but ran out of time to run to AC Moore to pick up the canvas. So I settled on using this basic Martha Stewart template to make a card.

If you follow the template exactly, you can make the little elephant or owl pictured above. I modified the template to add an extra water droplet, the bakers’ twine tail, the google eye, and some flowers growing in the empty spot under his trunk. To make the tail, wrap a length of twine around your thumb about 4 times and pinch this bundle in the middle. Cut the twine, then tie a short length of twine around the middle of the bundle. Once secure, cut the loops and give it a fluff. The flowers are scrapbooking embellishments that I just added paper stems and leaves to. 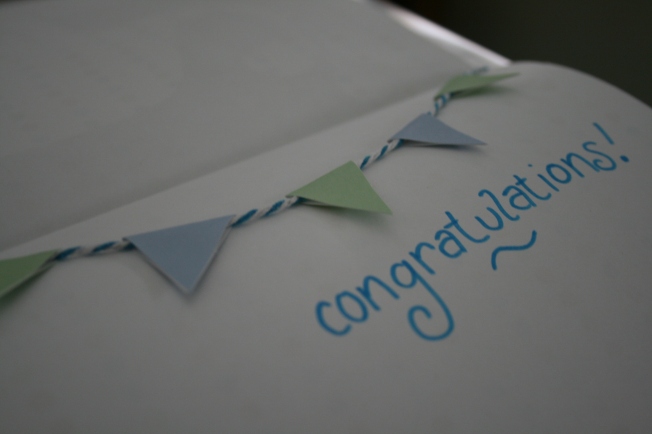 I wanted to add a little somethin somethin to the blank and boring inside of the card, so I decided to make a length of bunting in baby boy colors to add some color and texture. (Real motive may have been to use more of the bakers’ twine, which I have a slight obsession with.)

The bunting was so easy to do. You just need a piece of twine, kraft paper, glue stick, and a hot glue gun or tacky glue. For each flag, cut out a rectangle of paper twice as long as you want the flag to be from top to point. Fold the rectangle in half longways, and cut off the edges at a angle to form two triangles joined together at the top. Sandwich the flag over the twine and secure with a glue stick or tacky glue. I used a glue gun to adhere the bunting to the inside of the card. Use two (tiny tiny) dabs on either end and a couple underneath some of the flags, as needed.

Can we talk about cake pops for a second? I thought I was immune to adorable cake pops, but apparently I was wrong. Wish I had my camera at the party–there were giraffe and lion ones in additon to the little chocolate flavored monkey above that I took home as a favor. Too cute to eat? I don’t think so.