This day was one of our favorites and I can’t wait to share the photos of all the amazing things we saw.

But let’s start with the most important meal of the day. Breakfast at The Last Cottage was awesome. I had eggs benedict and Wes had porridge (oatmeal) with Bailey’s. Mine was good, but I have to tell you, I had major breakfast envy over this porridge. It was served in a big wide bowl with a teeny mug of Bailey’s to pour on top. The Bailey’s sweetened the porridge perfectly. It was just divine. Then we thought to ourselves, hmmm, we have Bailey’s and oatmeal at home. Why don’t we do this every weekend?

After breakfast we wanted to check out some of the shops in Dingle but they mostly didn’t open until 10, so we doubled back on our path from yesterday to visit Minnard Castle. The ruins themselves were not that spectacular, but the setting on the beach was not to be beat. On the horizon is the Iveragh Penninsula (Ring of Kerry.) The beach was protected by a large ring of stones. (These photos didn’t stitch together quite perfectly, still getting the hang of using photostitch to do these panoramas.)

Once back into town we lucked out and came across the farmers’ market (open Fridays.) The bread! The cheese! The handmade chocolates!

I would thoroughly enjoy another (dozen or so) of those lemon mint truffles. Mmmm. We picked up provisions including some apples for snacking in the car later.

We explored the shops in Dingle and I think the shopping here and in Kenmare was the best of any town we visited. (As I mentioned in my Day 3 post, good shopping=good quality, handcrafted stuff made locally, using local materials if possible.) We even purchased a couple of art prints which I’ll reveal in a future post.

We also popped back to take a photo of Dick Mack’s pub in the daylight, where we enjoyed spending much of our evening in Dingle.

Satisfied with our purchases in Dingle town, we headed out towards the peninsula loop. 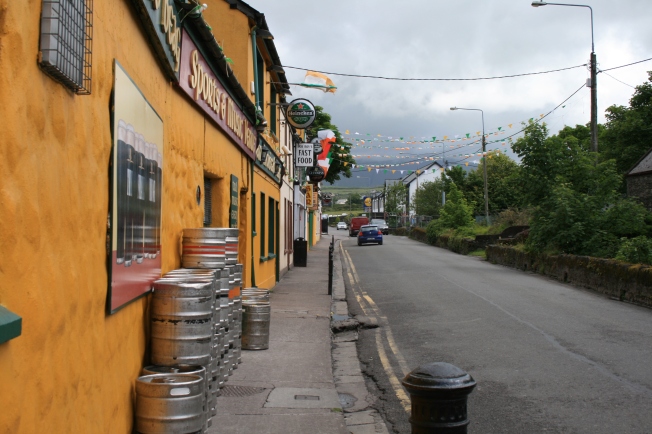 The weather was perfect. Clear and sunny with a little breeze. The water all around the peninsula was a dreamy Carribean-esque blue. I never expected the coast to be so dazzling. 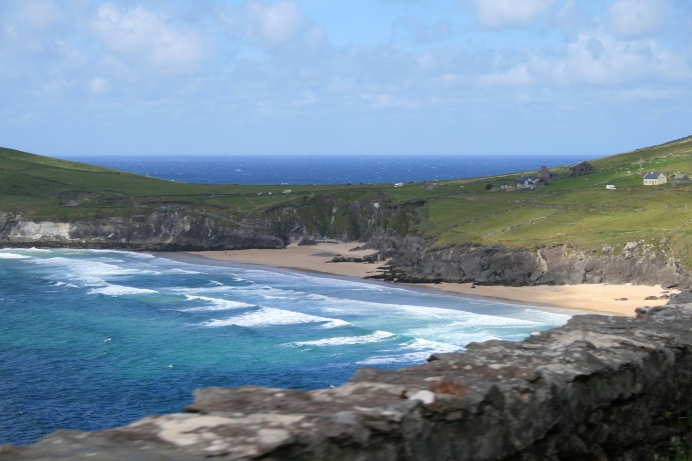 Pastures, livestock, and stone walls abounded. In the photo below you can see some of the tropical-ish flora native to Ireland due to the mild weather.

There were few tourists and no tour buses.

We stopped to see the ancient beehive huts. They were so tall you could actually stand up inside.

We came to a spot in the road designed as an “upside down bridge.”

Should we ford the river or caulk the Hyundai and float it across? Obviously, there wasn’t really a choice here but it still felt very Oregon Trail. I hope you’re forever grateful that I actually got out the car to photodocument this for you. 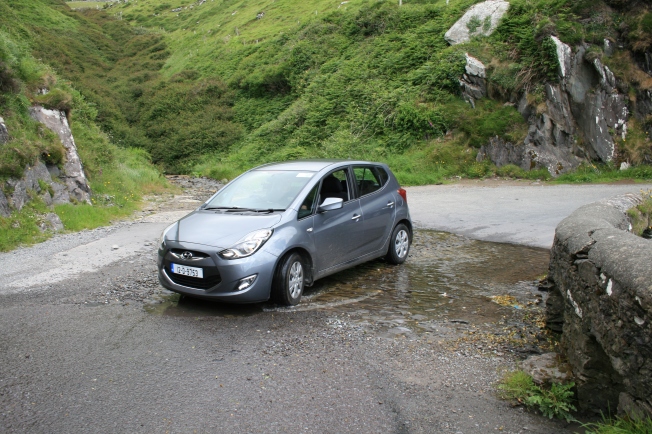 Some more beautiful views as we near the tip of the peninsula.

Off the tip of the peninsula are the Great Blasket Islands. As many as 160 Irish lived out on these islands until 1953.

Life on the Great Blaskets was no picnic. Irish who grew crops here would row boats to the mainland and then hike 12 miles into Dingle carrying their wares to sell. There was no priest, pub or doctor on the island, not to mention lights, phones, or cars. There were harsh storms to contend with, but the sea provided food and residents were able to survive the Great Famine because they were not entirely dependent on the potato. The population dwindled as young people emmigrated, often to America, until eventually the Irish government evacuated the remaining residents in 1953. All that remains on the islands to date are ruined cottages.

The Great Blasket Centre is worth a stop. (It’s on the mainland, 4 euro entry. Though we didn’t, you can travel to the the islands themselves-several local tour companies offer daily crossings, weather-permitting.) There are tons of photos, artifacts. and it really gives you a sense of the storytelling nature of this isolated Irish subculture. There were a number of renowned Irish writers from the Blaskets who had a knack for sharing about the people’s closeness to nature.

“I sat down on the bank above the beach where I had a splendid view all around me. Dead indeed is the heart from which the balmy air of the sea cannot banish sorrow and grief.” -Peig Sayers

The Dingle Peninsula loop road was just like you see below-cliffside, curvy, and narrow. Passing the little oncoming traffic there was was interesting but not stressful because it was so uncrowded.

In the village of Dunquin there were many ruined homes that were abandoned in the famine. In the pastures off to the right of the road you could see faint ridges of potato beds remaining from 1845-the fields have been untouched since this failed famine crop.

That about rounds out the highlights of the Dingle Peninsula drive.  The guidebook had a great kilometer by kilometer self guided tour which added a lot of context to some of the things we saw. This peninsula drive was my favorite thing we did on our trip. The entire drive including stopping everywhere and spending an hour at the Great Blasket Centre was about half a day.

Once we finished the peninsula loop, we took the Conor Pass enroute to Ennis, our final destination for the day. The Conor Pass is not for the faint of heart, but we were old pros by this point. Not only had Wes perfected his “keep left” driving ability, he has also somehow picked up a slight Irish accent. I practiced the only Gaelic phrase I know, “Go Mall”  (“Slow.”)

At the apex of the pass were stunning views of two different bays in opposite directions. 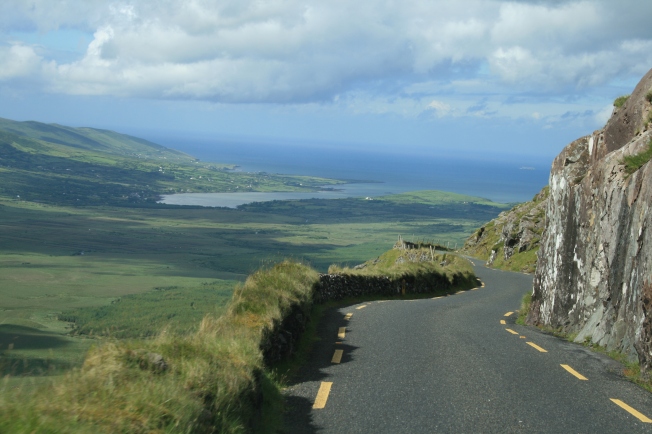 See the sheepie in the photo below? How did he get there? He’s on top of a 500 foot tall steep mountain.

There was a pulloff by a small waterfall. 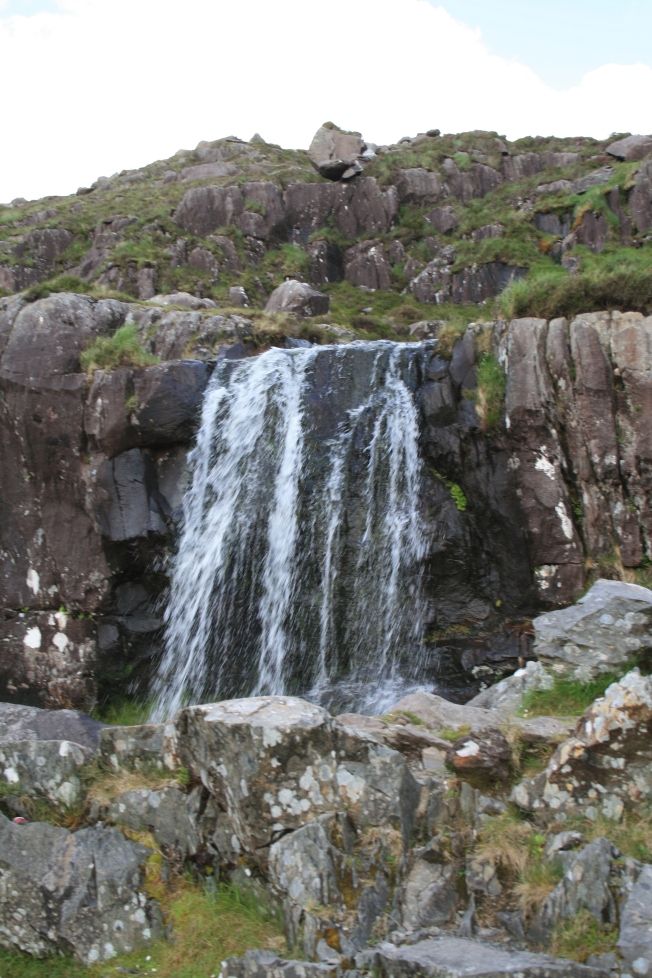 The guidebook promised a “fun five minute scramble” would lead us to a “dramatic glacier created lake.” Indeed it did.

Not to mention, the breathtaking view over the Conor pass itself. 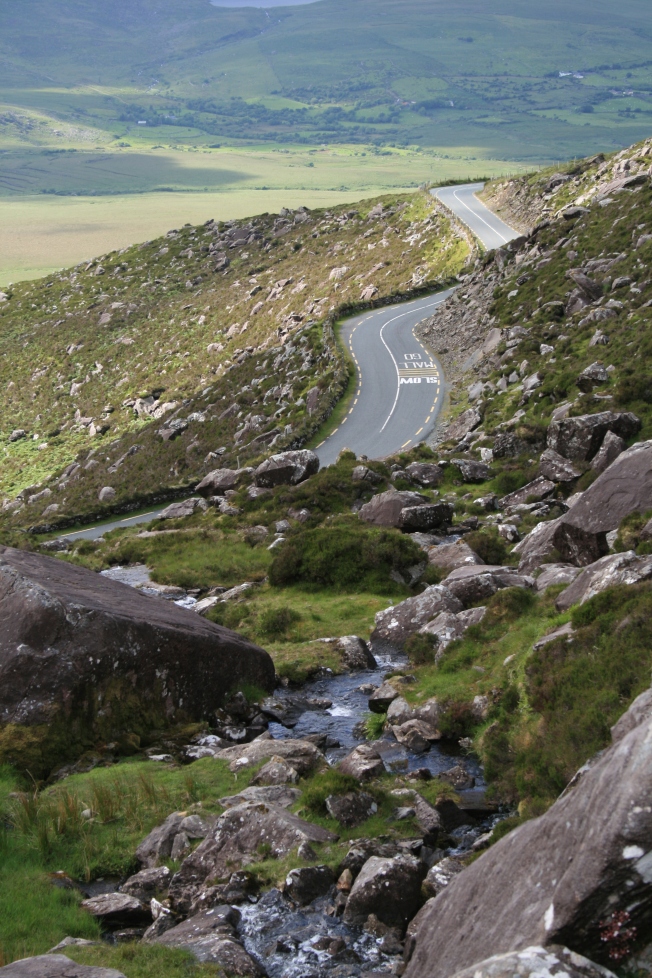 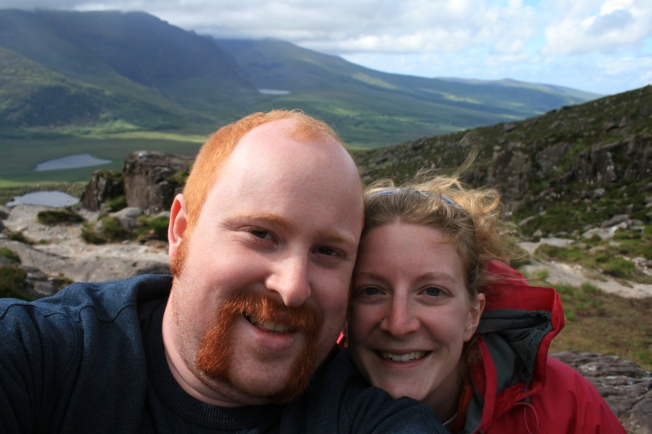 Once back in the car some more of these guys made an appearance in the roadway.

Next, we passed through Tralee and took a drive by windmill photo. 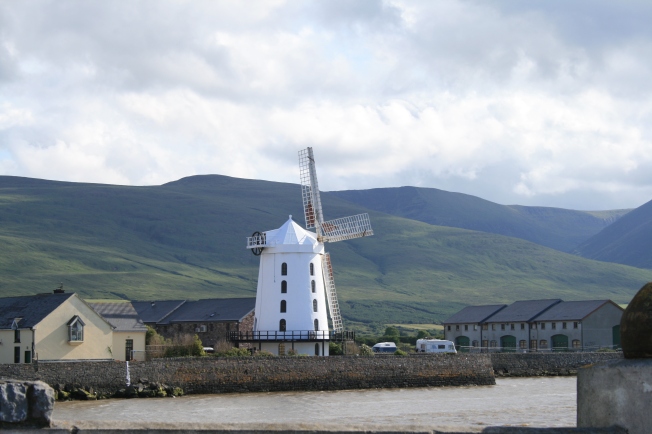 Then it was smooth sailing to Tarbert where we took the car ferry over the River Shannon to Killimer. I think this was the best 18 euro we ever spent because it saved us about 80 miles of driving. 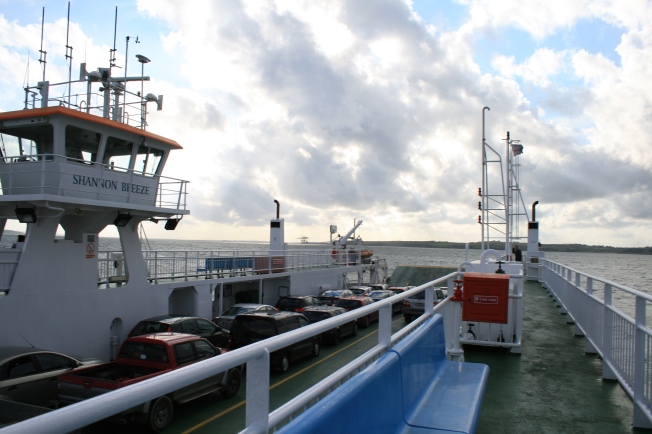 A little bit of rain here, but Wes captured this photo of the sun peeking through the clouds.

Once across the Shannon, we were upon Ennis, our destination for the evening and our 4th stop on the map below.

Next up: we visit the Cliffs of Moher and the Burren on our way to Galway, so check back soon!